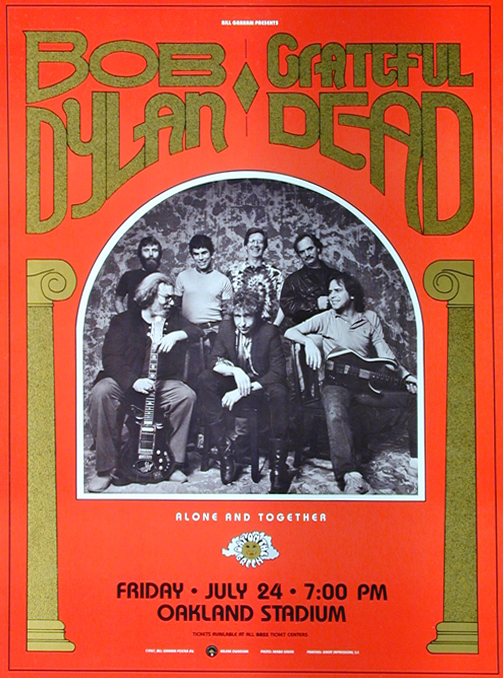 Reviewer: Dark Star 101 - favoritefavoritefavoritefavorite - July 25, 2020
Subject: Acquired Taste for Sure!
I was there and it was quite the spectacle. Dylan is obviously a legend who wrote so many iconic songs, many of which have been featured in the Dead repertoire. So there he was, raw and unvarnished, belting out so many classic tunes with his very unique tone and phrasing. Some songs were a bit rickety, but others simply soared with our boys doing what they do best. Jerry on pedal steel was a treat. So, it is what it is - take a deep breath and feel the vibe - or pack up the car and head for the next show. I for one thought it was great!

Reviewer: BigFerg - - July 2, 2017
Subject: Right on C-Freedom
I love and respect Bob Dylan. But... Dylan was a non factor for most of these shows and it sure looked like they had had it with him in Foxboro! He looked (and sounded) like he was cocked. Worst shows in the dozens and dozens I saw. I am not rating this Oakland show. I was not there.

Reviewer: c-freedom - favoritefavoritefavoritefavoritefavorite - July 24, 2016
Subject: I want you soooooooooo bad...
Dylan and Dead is an acquired taste for sure but once you get it into your system Dylan draws you in and every once in awhile he just absolutely finds the sweet spot and blows everyone present completely away.
i was at the Philly show at the beginning of this tour and to say it was pretty rough around the edges is an understatement. Overall this is a much more together set than the Philly show. The Dead are certainly grooving and Dylan although ever elusive is much more front and center here.

Reviewer: K'zoo Tater - favoritefavoritefavoritefavorite - July 25, 2013
Subject: Knocking on Bob Dylan?
of all places, I'd really not expect fans of the Grateful Dead to criticize Bob Dylan & his "sound" or "style"....In a couple posts I read that he a) was out of tune & b) the most intoxicated of any in attendance....WTF? DYlan is Dylan, he always was a bit different in his tone & style than any other performer I've come across in my 35+ yrs of show-going. And if the criticisms come from any true "deadhead"....c'mon, we know and love a band who've made plenty of mistakes, had off nights, forgotten lyrics, missed musical transitions, etc. etc....Don't get me wrong, I love the GRateful Dead & their music & interpretations...and I also accept and have appreciated them for what they could give "us" on any given night.
IF you dont like Bob Dylan or his style/sound/songs/voice, whatever. If you dont get it, thats understandable & that's totally cool. but to criticize his musicianship & professionalism by listening to a recording is just WRONG

Reviewer: billman68 - favoritefavoritefavoritefavorite - August 17, 2012
Subject: I WAS There
Was at this show and at Anaheim 2 nights later, and yes, they were awesome (that's a word we used a lot back in the 80s). These shows demonstrate what an amazing backup band the Dead were. Further proof can be found on the Internet (Archive). Look for the New Year show where Etta James sings Midnight Hour and (Turn On Your) Lovelight (along with the Tower of Power horns) or any Pigpen rap where the boys are churning and vamping like a well-oiled machine behind him. Or any number of other guest singer appearances like Spencer Davis at the LA Forum in February and December of '89.

We saw the pedal steel guitar on stage and didn't think much of it 'til Jerry sat down behind it for the Baby Tonight and didn't see it there at Anaheim. It was premeditated!!

A very nice Highway 61 done as a slower shuffle instead of the slightly off-kilter, speedy album version and some nice regular 6 string slide work from Jerry.

Try telling people that "Mr. Jones" is actually called 'Ballad of a Thin Man' and watch them amend their set list to "Ballet of a Thin Man" and sigh heavily as you offer them the definition of ballad (did i stutter? Do I have some sort of inexplicable accent that turns a voiced consonant into a vowel? Do you think ballet is pronounced with a consonant at the end?). Also consider that this was YEARS before Counting Crows "Mister Jones".

These shows were done near the start one of the 4 best eras of live Dead ever* and coming on the heels of Dylan's revitalization after touring with Tom Petty breathed new life into both Dylan and the Dead.

Reviewer: Joshua_me - favoritefavoritefavorite - August 12, 2012
Subject: Heh...
I mean, MAJOR Props to Mr. Dylan, (having written some of the *greatest* lyrics of our, or anyone else's generation. "Watchtower" alone is the stuff of unspeakable greatness...)

But during this particular performance. Um. Is he even on the same planet with the rest of us ?

Being the most F'd-up artist at a GDead gig is quite an accomplishment, to say the least.